Today, manufacturers and distribution center operations are faced with a constrained labor pool, while the volume of new e-Commerce orders is escalating more rapidly than ever. Consumers seek affordably priced products that can be delivered directly to them in record time. Materials need to be quickly manufactured and assembled into high-demand product offerings, that may also be standardized into convenient packaging options for ease of distribution. Where rising demand was once met with through the addition of more workers or added shifts, companies must now turn to enhanced products and automated robotic solutions to move product more quickly and efficiently, boosting performance from within.

The good news is – there are numerous possibilities to consider: Simple productivity tools; Human-driven, semi-automated solutions; to Fully-automated robotic systems:

Carts
Man-powered and customizable. Typically, only one operator is required per cart.
Fork Trucks (Lifts)
These human-driven, powered industrial trucks are used to lift and move palletized material over short distances. One operator per truck.
Trucks with Carts
These human-driven, powered tuggers tow multiple pallets or products, recducing the amount of time or individuals moving products.
Automated Guided Vehicles (AGVs) and Autonomous Mobile Robots (AMRs)
These motorized vehicles and intelligent robots can operate independently to transport product or perform repetitive tasks while little to no human interaction is required.
Conveyors
Mechanical handling equipment for automatically transporting large volumes of materials and bulky loads within a defined point-to-point area.
Click here to visit our Blog! 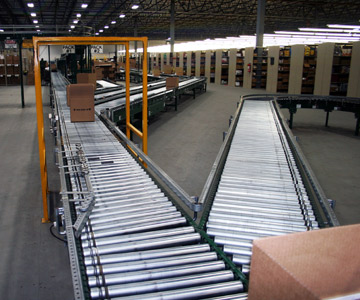 Conveyors are most often used to address high volume transport of moving product(s) through a manufacturing or distribution process. They are routinely used to move totes or boxes from picking (inventory) to packing and packaging with some degree of sorting in between. Conveyors can also be used to move pallets, particularly in manufacturing environments.

Drawbacks to conveyor systems include their need for regular maintenance and their lack of flexibility toward change. Systems are expensive to alter and can be highly disruptive to continuous production environments. While operational up time is commendable, when they do go down - it may cease all production. Mechanical issues and Controls issues are common, and a service and parts plan is recommended to remedy issues quickly when stoppages arise.

Which is best? It’s all in the variables of your application: the material are you transporting, material dimensions and composition, what function the system serves (conveying or feeding), and the workspace environment you have available.

Order Picker Carts – Carts are carried by order pickers and then dropped off, allowing multiple orders to be picked at a time. Once filled, they are rolled to packaging (or the next stop), allowing another empty cart to be picked up and dropped off, maximizing throughput of “Puts and Picks” from inventory. Order Picker Platforms feature a mobile platform for “Put or Pick” of larger bulk or case goods.

Fork Trucks – Also referred to as forklifts or lift trucks, these human-driven, powered vehicles can be found in most every manufacturing plant and distribution center. They are proficient at loading and unloading large delivery trucks, and for moving pallets up and down beam levels within rack storage systems.

Tuggers with Carts – Also human operated, an electric or battery-powered tugger is driven with a towable cart (or carts) hitched to it like a train, allowing multiple pallets (products) or heavy loads to be transported in bulk across the production floor.

Tuggable cart configurations provide a much more efficient way of moving product horizontally throughout your operation.

Both Automated Guided Vehicles (AGVs) and Autonomous Mobile Robots (AMRs) automate the movement of product from Point A to Point B, with little or no human interaction.

AGVs are best suited for simple, repetitive routes that are mapped out using either wire guidance (that emits signals) or opti-guidance, which uses onboard cameras to follow painted lines on the floor.

AMRs are modern day robots. More flexible than AGVs, they typically use laser guidance to navigate a network of reflectors integrated into the environment. Supervision software is provided to oversee the robot’s instructions and accuracy. More advanced is the use of geo-guidance to direct the robots. This requires a map of facilities be created so the AMRs can find their way around autonomously and calculate their path automatically. Simultaneous Localization and Mapping (SLAM) is a core capability required for a robot to explore and understand its environment.

A clear advantage to this technology is its flexibility and increasing reliability. Although still a sizeable investment, AGVs and AMRs can now be cost justified much quicker than ever before.